Geometric monitoring of the Bremen Cog 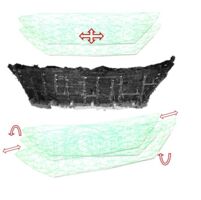 The project focusses on the conception and implementation of the geometric monitoring of the Bremen Cog (appr. 25m x 8m x 8m). The Bremen Cog is the best preserved medieval merchant ship in the world. A large-volume optical 3D-measurement concept is applied in order to allow for deformation measurements.
people

The Bremen Cog is dendrochronologically dated to the year 1379. The medieval Hanseatic shipwreck is one of the largest archaeological ship finds and can be seen in a permanent exhibition at the German Maritime Museum. The preservation of this cultural asset is an important task. A measurement concept is to enable the determination of deformations of the cog while maintaining the museum's operation and the presentation of the Cog to the general public in the long term.

The Bremen Cog at the German Maritime Museum

A research cooperation was concluded with the German Maritime Museum in Bremerhaven, which, among other things, pursues the joint implementation of the geometric monitoring of the Bremen Cog and the development of suitable analysis methods of the results in research projects. In 2020, the implementation of the measurement concept could be realized. Until September 2021, three measurement epochs were recorded and evaluated.

In 2018, a measurement concept for geometric monitoring was developed for the Bremen Cog, which allows the determination of deformations of the Cog with the highest precision. Changes in the order of a few millimeters are to be revealed in the long term to provide scientists at the Schifffahrtsmuseum with information about the geometric behavior of this cultural asset and to support decisions about its preservation. The Cog has a length of about 23m and covers a width and height of about 8m each. The detection of small deformation in millimeter range requires  highest single-point precision, which can be guaranteed by means of a photogrammetric measurement concept.

To maintain a defined geodetic datum for long-term deformation analysis, a ground control network is implemented in the building structure of the exhibition hall. A laser scanner survey of the cog hall and the Bremen Cog itself are used for system planning and visualization. Overall, it must be taken into account that the ground control network represents an external network, which leads to unfavorable intersection conditions for photogrammetric monitoring. The ground control network is accurately measured in a superordinate manner by means of laser tracker network measurements. Adapters to accommodate 1.5" SMR and 1.5" photogrammetry hemispherical targets with 2cm retro-reflective targets allow compatibility of both measurement methods.

Retro-reflective measurement targets were applied for the object points to be captured; these are removable without leaving any residue. A total of ~1000 measurement points have been attached to the cog and the elements of the current support structure. In addition, 500 coded measurement marks were magnetically mounted for automated evaluation.

The photogrammetric acquisition is based on complex image networks, in which the simultaneous calibration of the measurement system and the link to the ground control network are of increased difficulty. The cog is embedded centrally in the ground control network, but due to its shape with a pronounced stem, it is closer to the base network at the stern. The points of the ground control network are located outside the current survey object, distributed over three visitor levels. Only the two lowest levels are of importance for the photogrammetric survey. On the one hand, this is due to the fact that the ship has a detectable extension (volume) only up to these levels. On the other hand, the position of the points in the uppermost plane is so unfavorable in relation to the measured object that they cannot be recorded with an adequate level of accuracy. In this case, the acquisition of the fundamental points in the lowest plane is additionally of the highest quality, since they are acquired by ray sections of higher quality and quantity. The photogrammetric image lattices are evaluated using bundle adjustment, with storage on points of the fundamental mesh. The photogrammetric measurements are performed with an AICON High End Digital Camera DPA with AICON Metric Lens. The AICON 3D Studio is used for the evaluation. The final bundle adjustment is performed with AXIOS software Ax.Ori. In the initial phase of the project, the measurement campaigns will cover the basic network by means of laser tracker net measurements and the cog monitoring by means of photogrammetry.

3D representations of the image network for first measurement with exemplary representation of image rays (green: object points on the cog and support frame; white: camera points and image rays)

In perspective, an analysis and visualization concept for deformation measurement of the Bremen cog is to be developed on the basis of the measurement data. An influence of the tide on the building structure is assumed, since the museum is located on a peninsula off the mainland in the harbor basin of Bremerhaven at the mouth of the Weser to the North Sea. Thus, for the deformation measurements on the Bremen cog, it results that the date definition cannot be considered stable. The tidal influence must be specified in more detail and taken into account in the analysis concept to be developed.